Born in Denmark in 1926, Verner Panton trained as an architectural engineer at the Odense Technical School and studied at the Royal Danish Academy of Fine Arts in Copenhagen. In his early career, he was employed by John Tommerup, Poul and Simon Henningsen, and Arne Jacobsen, before starting his own design studio in 1955. Initially he fitted out a Volkswagen minibus as a mobile studio and drove around Europe to visit designers and manufacturers.

Panton was particularly interested in experimenting with the new industrial materials and technologies that emerged in the post-war period. He developed a cantilever chair in wood during the 1950s but was interested in creating a similar seat in plastics. By 1960, Panton designed a chair that could potentially be mass-produced in a single piece, but due to technical difficulties arising from the use of the chosen material, rigid polyurethane foam, it was not successful. The chair was not adapted for commercial production until 1967, when an injection moulded fibreglass-reinforced polyester version was marketed in six colours applied after moulding. In 1970, the material was changed to Luran-S, a trade name for ASA (Styrene Acrylonitrile Copolymers), an injection moulded, non-reinforced thermoplastic.

Panton’s vision was to create a single material chair, producible in one process; a chair that could be taken out of its mould in its final form with integral colouring. After many incarnations, and after Panton’s death in 1998, this vision was finally achieved by Vitra, in their 1999 polypropylene version of the Panton chair. 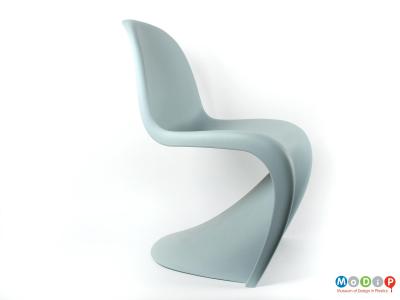