In the tradition of 19th century designer Mario Fortuny, who was known for developing a technique of producing exquisitely hand pleated dresses, Issey Miyake is renowned for designing in a way that blends traditional handicrafts and the newest production methods. Born in Hiroshima, Japan, in 1938, Miyake graduated in 1964 from the Tama Art University, Tokyo. After a few years of working in Paris and New York, Miyake returned to Tokyo in 1970 where he founded the Miyake Design Studio, producing high-end women’s fashion. He became well known for creating garments that utilised experimental pleating to create a sculptural silhouette with a flexibility that made them easy to wear and care for. Miyake developed a method of permanently pleating fabric which was made possible by exploiting the thermoplastic properties of synthetic fibres.

Miyake has combined traditional techniques with modern technology to create a series of lamps including the Mendori LED table lamp. Designed by Miyake and Reality Lab for Artemide, this lamp is from the IN-EI collection, IN-EI meaning shadow, shade or nuance. The shades or diffusers are formed by combing mathematical principles and traditional origami or folding techniques, creating structures which keep their shape without the need for an internal supporting frame. They can be stored flat when not in use. The mathematical program created by Jun Mitani, Professor of Computer Science at the University of Tsukuba generates a shade that uses a single sheet of fabric created from recycled PET bottles. 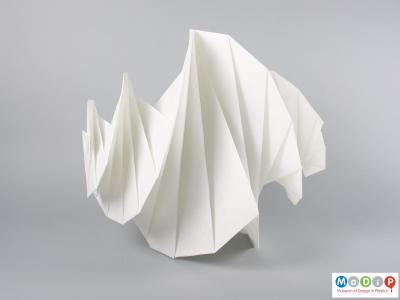