Recorders have been used since the 15th century and are typically made of hardwoods such as maple, rosewood and ebony as well as ivory. They are part of a family of instruments, the fipple flute, that dates back to 60,0000 BC and can be found in almost all cultures. By the 18th century they had become an established part of the orchestra but were beginning to be replaced by the transverse flute by 1750. The recorder became obsolete until it was reintroduced by Arnold Dolmetsch who was interested in early music and realised it could not be played without the instrument it was written for.

Recorders were introduced into schools in the 1930s with cheaper plastic materials enabling large numbers of children to learn a musical instrument. The recorders that many of us learnt to play at school are made of black and white acrylonitrile butadiene styrene (ABS). The descant recorder made from a clear acrylic (1) allows us to see the way the recorder is put together. The mouth piece comprises a block that funnels the players breath along a small channel and past an opening before entering the main body. The simple tubular body has a conical taper towards the end and has finger holes which can be partially or fully covered to change the note played. 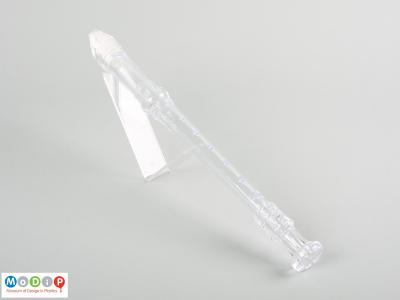 The Yamaha recorder (2) has eco credentials being made from a compound of 'Ecodear' polylactic acid and ABS in a ratio of 3:7. The manufacturers say that this compound has the same workability, durability, strength and appearance as ABS whilst giving a tone similar to that of wood recorders. 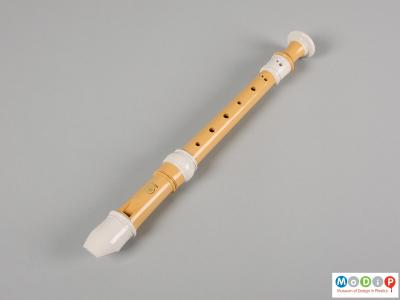 The clarinet plays differently from the recorder with the sound being generated through the player's breath causing a reed to vibrate. The clarinet was the first reed-blown instrument to have a cylindrical, rather than, conical bore. This Hawkes & Son example (3) dates from 1925 and is made of ebonite, a rubber which becomes hard through the act of vulcanisation, the adding of sulphur, to make a more durable, hard material. 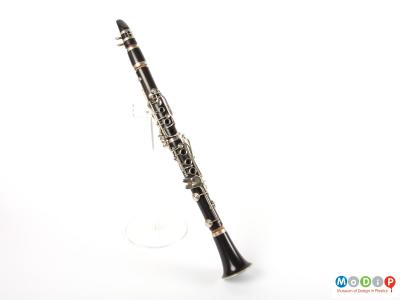