Pressing a key on a musical instrument can cause a string to be plucked or struck, or it can direct the flow of air over a reed making it vibrate to produce sound, or enable an electrical current to flow between printed circuit boards causing notes to be generated.

Piano keys are traditionally constructed from wood, the white keys being topped with a thin veneer of ivory. As the use of ivory became unacceptable and old, worn keys needed to be refurbished, alternative materials were used. Manufacturers found that plastic materials were easier to work, less prone to damage and relatively inexpensive to produce. Acrylonitrile butadiene styrene (ABS) is one such material and it is widely used for replacement keys and key tops (1). From the finest of acoustic instruments to electronic keyboards, new white keys or veneers are made of synthetic materials. 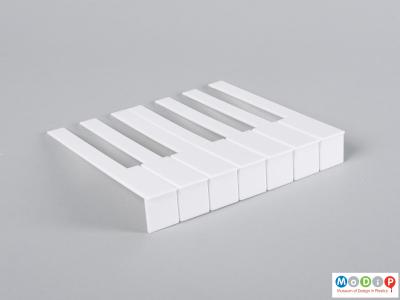 Roll up piano keyboards (2) provide the opportunity to play or practice keyboard skills when access to a full sized instrument is difficult or space is limited. This example, is made from flexible silicone rubber a material which is relatively stable, resistant to extremes of temperature and moisture and can stand up to the rigours of being rolled and unrolled without deteriorating. Silicone is a very tactile material, feeling soft and responsive to touch. This instrument's relatively low cost puts keyboard playing within reach of most. 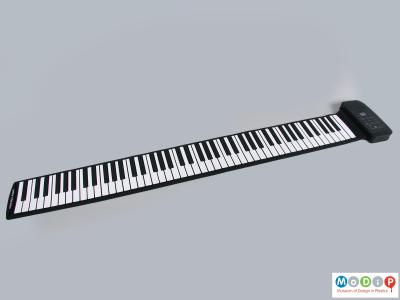 First produced in the late 1950s, the melodica is a variation of a mouth organ. It incorporates a small keyboard which is played whilst blowing into a mouthpiece. Pressing the keys directs the flow of air over reeds which vibrate and produce sound. The addition of a flexible hose with a mouthpiece enables the player to use two hands whilst other examples are played in a vertical position with a mouthpiece at the top, using one hand to depress the keys. This example (3) is manufactured by Yamaha and exploits the impact resistant properties of ABS for its casing to deliver a lightweight, portable instrument. 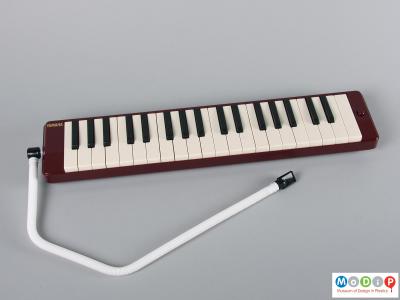