Mario Maccaferri was a successful reed manufacturer in Paris who, in the lead up to the Second World War, relocated his family and business to New York. He was patronised by high profile musicians as a result of endorsements from jazz clarinettist and band leader, Benny Goodman. Difficulties in obtaining machine parts and supplies of natural reeds during the war lead him to seek new materials and methods.

Maccaferri's interest in new plastic materials was sparked at a visit to New York's World Trade Fair in 1939, and he began to make reeds from polystyrene (1). In spite of initial resistance to this non-traditional material, the new reeds were soon accepted as a viable alternative, due, once again, to the endorsement of Benny Goodman. 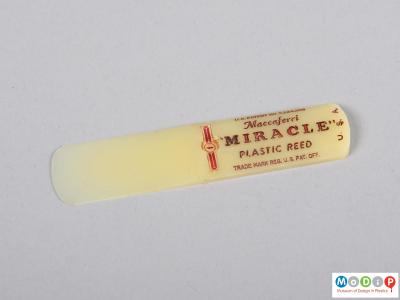 It was the difficulty of obtaining consumer goods during the war years that encouraged Maccaferri to branch out into producing other plastic objects such as clothes pegs and wall tiles, which sold in their millions. Returning to his original love of music, Maccaferri's next undertaking was the Islander polystyrene ukulele (2). 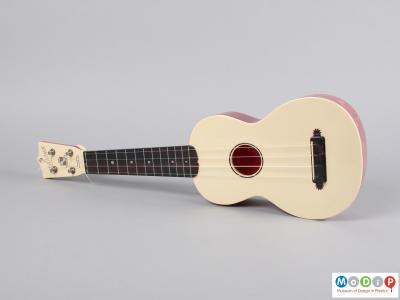 Taking advantage of the popularity of Hawaiian music in the late 1940s, and once again, gaining the support, encouragement and endorsement of a popular entertainer of the day, radio and television show host, Arthur Godfrey, the Islander ukulele quickly achieved success. It was injection moulded in eight parts, using a range of colours, and featured moulded fingerboard frets and Dupont nylon strings. Similar in appearance to an earlier toy ukulele by Mattel, Maccaferri was at pains to have his ukulele accepted as a serious musical instrument and spent time in deciding upon a particular type of polystyrene which had the tonal qualities of wood. His driving force was to create musical instruments at affordable prices and retailing at only $5.95, approximately equivalent to $45 today, this ukulele sold more than nine million by 1969, when a change in popular music meant that demand dropped and Maccaferri sold out to a rival company.