Many popular games have evolved over the centuries involving the use of a ball made from available natural materials. As games and sports evolved, players demanded greater predictability when hitting, kicking or throwing a ball than could be achieved by the use of natural materials. Plastics offered the required consistency during production and desired characteristics to produce a ball perfectly suited to the game. The ability of plastics to mimic the best and eliminate the worst characteristics of a natural material often means that plastic is now accepted as the best material for the job.

Historically man has played a game not dissimilar to modern soccer using an animal skin ball, skull or an inflated pig's bladder. The first wholly synthetic ball was produced in the 1960s. Modern technology seeks to emulate the cell structure and qualities of leather with little or no water absorption. This example, the Europass 2008 (1), is manufactured by Adidas. It comprises a bladder, textile and foam substrate and outer layers of polyurethane and Impranil, a branded polyurethane based textile coating with a textured surface. The nub-like structure of the surface provides improved grip and a larger contact surface area allowing the player more control over the ball in all weather conditions.

Early forms of table tennis used balls made from rubber or cork. In 1900 hollow Celluloid (Cellulose nitrate and camphor compound) balls were introduced. Manufacturers have been encouraged to search for an alternative material to Celluloid, the standard material, but as yet there are no serious contenders on offer. The balls are vacuum formed in 2 halves from a sheet of material and assembled to form a sphere using a reinforced butt joint. Examples shown here are Dunlop (2) and Donic Schildkrot 3 star (3) and unmarked coloured training balls (4) and are made from two component vacuum formed Celluloid. 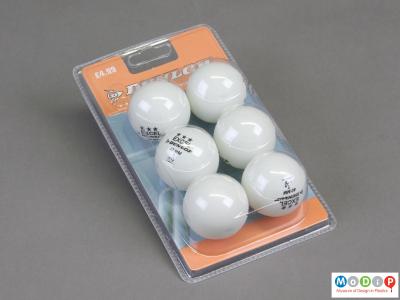 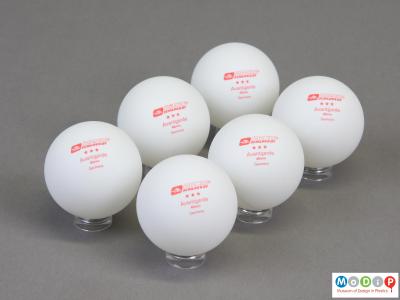 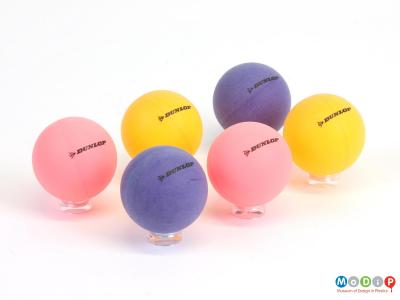 Billiard balls are used in a variety of cue sports and were made variously from wood, clay and ivory. Today, top quality billiard balls are cast in phenolic resin, a material which is strongly resistant to cracking and chipping. These snooker balls (5) are made by Saluc of Belgium from Aramith, a trade name for phenolic resin. Another commonly used material is polyester as in the Pool balls shown here (6). Whilst appearing the same and being cheaper to produce, polyester does not offer the same resistance to the inevitable stress of impact. Although considered inferior, the economy of production makes the polyester ball a popular alternative. 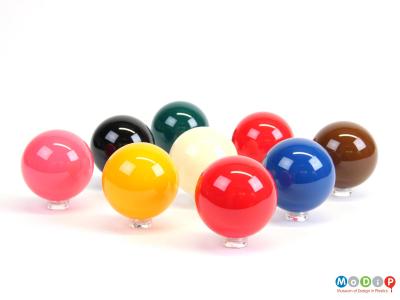 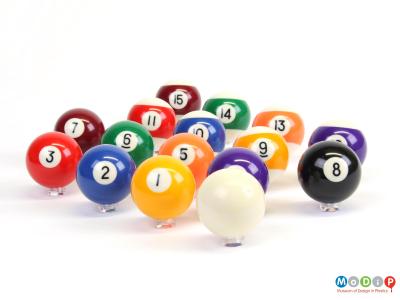 The modern game of ten pin bowling was developed over many centuries. The first plastic balls became widely available in the 1970s. They were developed in response to changes in the surface of the bowling lanes which affected the way the ball rolled. Modern bowling balls have either a spherical, symmetrical or an asymmetrical core of differing weights and densities which help to direct the path of the ball by affecting the way it spins as it rolls forward. The outer layer is of polyester or high performance urethane which is ground, trimmed and polished. This Target Zone Brunswick ball (7) has a polyester resin and mineral filler mix core and a polyester shell. 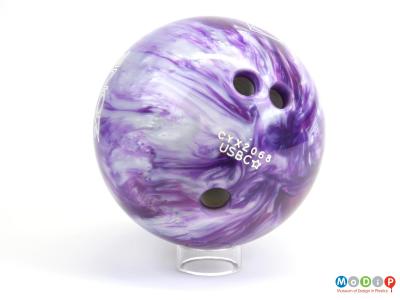