The material something is made of has a great effect on its speed. Its weight or mass will slow it down, its texture can cause aerodynamic drag, and the shape the material can be formed into can affect momentum. Plastics have been used by manufacturers to over come many of these issues.

The main factor slowing the sportsman down is aerodynamic drag. In simple terms aerodynamic drag is caused by an object moving forward into air which is high in pressure, leaving behind it an area of air which is low in pressure. The high pressure air will always move into the low pressure area, so the high pressure air will push back and around the object. This movement of air will drag back on the object causing it to slow down. To feel the effects of aerodynamics on a basic level try walking against the wind on a blustery day; more effort is needed to walk forward because the air is pushing back against you.

On a still day we do not feel the effect of the air as we walk forward, but the faster you go the more wind drag there is to overcome. It is said that at 25mph, 80% of an average bicycle rider's power output is used to overcome the effects of wind drag when riding on the flat. Much money and time is invested by sports engineers to reduce this significant force.

This bicycle frame (1) is made of carbon fibre, a material which for the same strength as a metal frame is significantly lighter, in addition the geometry of the tubes and the smoothness of the material help to reduce the drag. 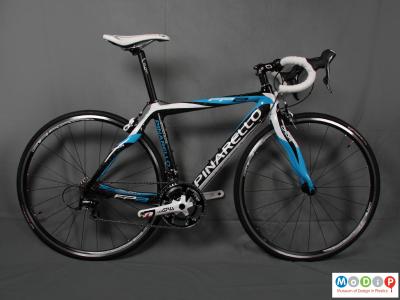 The battle between speed and protection has always caused problems for Cycling. Early cycle helmets made of leather were heavy and became hot and even in recent years some cyclists refused to wear any protection on their heads. But in 2003 An­drei Kinilev fell from his bike during the Paris-Nice race and died from head injuries. The UCI (International Cycling Union) then made it compulsory to wear a helmet during road races.

Cycle helmet developments had to move quickly to satisfy teams and riders. The Giro Ionos road helmet (2) has the latest in aerodynamic technology. The shape moves smoothly through the air, and the vents allow cool air to flow over the head, taking warm air with it out through the rear exhaust channels. The Aero helmet (3), used during Time Trials, creates a smooth streamlined shape with the body and reduces the pockets of aerodynamic interference that can occur behind the head. Both of these helmets use plastics to create shock absorbing protection, with expanded polystyrene, and super smooth moulded polycarbonate surfaces. 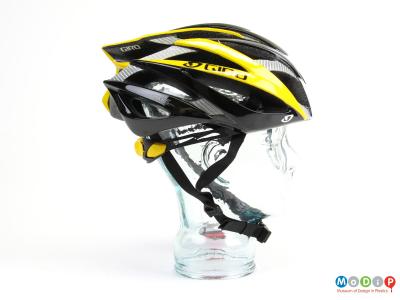 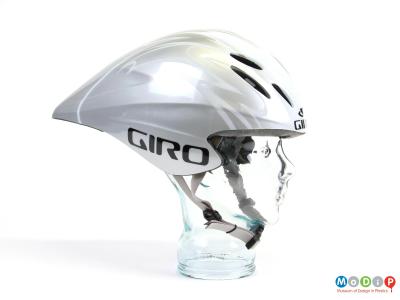