Feet are a very important part of the body in many sports; they connect with the ground or with equipment providing vital propulsion and stability. Innovations in plastics help sporting footwear to protect the foot from injury and provide the correct platform for the body.

In Snowboarding, the boot has to be warm, flexible and supportive of the foot and ankle. Snowboarding developed in the 1960s and 1970s, and become a Winter Olympic sport in 1998. It has closer links to surfing and skateboarding than with skiing and likewise every move the board makes starts with input from the feet, therefore the structure of the boot and its sole is extremely important.

These Vans boots (1) support and cradle the foot and ankle providing a comfortable, cushioned ride. The BOA Coiler lacing system allows the boot to be put on and taken off in minimal time unlike traditional laces and provides an even tightness across the whole boot. The fabric of these boots, made of a variety of plastics, provides a breathable, lightweight construction with good insulation, and waterproofing. 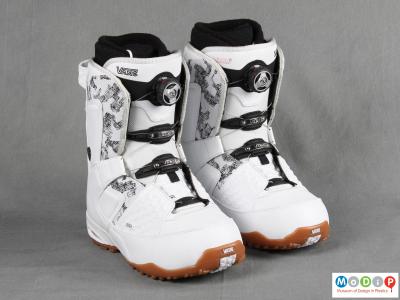 Unlike Snowboarding, football has a long history and the football boot has developed over time and now fully embraces plastics. Early players wore their work boots, often with steel toe caps and added metal tacks hammered through the sole as studs to increase grip on the ground. They were made of leather and in wet weather would absorb the water and double in weight making it much harder to run.

Football boots were initially designed to protect the foot, but after the Second World War boot producers started to design footwear that focused on kicking and controlling the ball. By the 1950s, plastic and rubber interchangeable studs were used and boots were beginning to be made out of synthetic materials as well as leather to produce a lighter shoe.

The Lotto Zhero Gravity boots (2) have the first laceless design and are completely made from synthetic material. The microfibre upper has 'pro-fit technology' moulding to the player's foot allowing maximum sensitivity in controlling the ball. The insole is made from a material called Poron® which is breathable with an open cell structure which absorbs moisture, keeping the shoe and the foot dry. 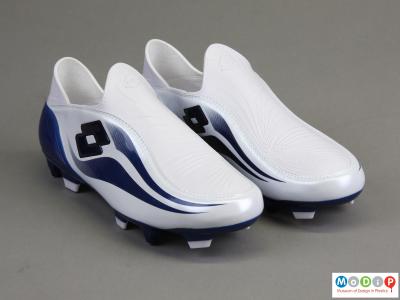 Plastic can also be used to create a boot that protects the foot in a high speed crash. As with the Vans Snowboard boots, these Sidi Motorbike boots (3) are mostly made using plastic and rubber. The Techno VR closure system uses a nylon thread to provide micro adjustments wrapping the boot systematically around the calf to create a good, comfortable fit. 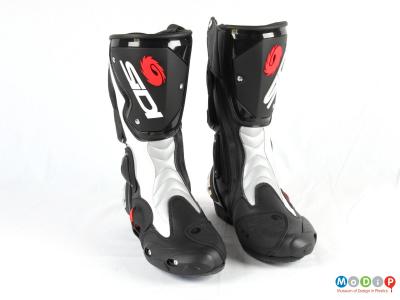