Rayon is a generic term that has been in use since 1924 to describe a semi-synthetic fibre derived, using a range of processes, from a soluble cellulose fibre compound, acquired from cotton linters or wood pulp. The compound is forced through a spinneret to produce filaments which are chemically solidified, resulting in semi-synthetic fibres.

The first semi-synthetic fibre was developed by Hillarie de Chardonnet in the late 19th century. It was known as artificial silk or Chardonnet silk and had a lustrous quality. But later developments in the manufacturing process produced rayons with a range of other characteristics making it a good choice for the apparel industry. Rayons are soft fibres with good moisture-absorbing properties and will accept dye easily. As well as its ability to present a silk-like appearance, it can be made to emulate cotton, linen, wool and fur (1). 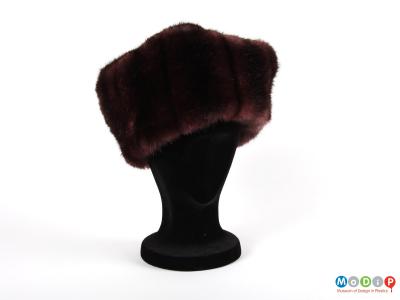 The women’s stockings (2) are an early example from the Berkshire company, pioneers of the use of rayon in hosiery in the USA. They have a soft lustrous quality but unlike hosiery of today, which is made from fibres which stretch and return readily to shape, these stockings relied on their fully-fashioned design to give them shape and form. 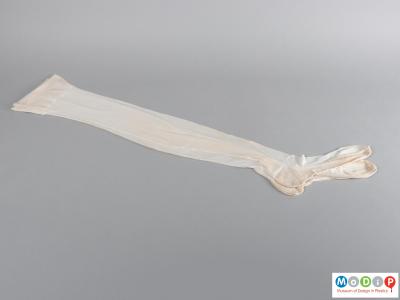 The lustre of the scarf (3) and the utility era women’s blouse (4) demonstrate the demand for fabrics with a luxury feel but with a price tag accessible to all. Although post World War II other synthetic fibres such as polyamide and polyester became available, rayon fibres remained popular, especially when blended with other fibres to overcome the tendency of rayon not to return to shape or to sag if wet. 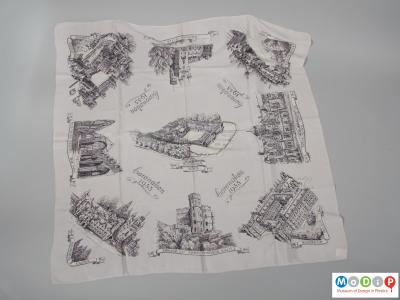 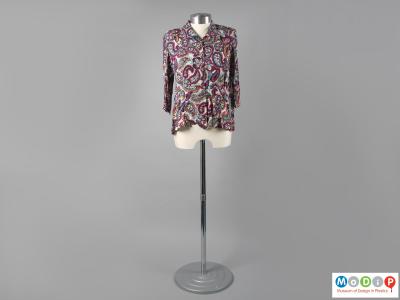 The man’s shirt by Ben Sherman (5) is an example of the use of viscose rayon. It has a soft feel and has been surface dyed. This form of rayon was developed by Courtaulds in the early 20th century and is so named because a highly viscous solution is formed during the particular manufacturing process.  Rayon is still made worldwide by a range of developing processes. 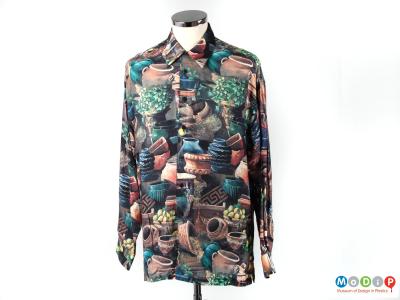