Simple drinking horns have been in use since classical times although the earliest known surviving horn mounted on feet dates from the 14th century. Not all drinking horns were used for drinking. Often they were given as a symbol of the right to hold office and were used for ceremonial purposes. Horns can be extremely simple or highly decorated objects of immense prestige as is the case with the two examples shown here. The horn at (1) is a 19th century copy of a medieval style drinking horn and is mounted on three silver claws and has a silver finial in the form of a reptilian head. It was given to the Horners by a former master of the Company. The other horn (2) is supported by an elaborate putto, baroque in style, with intertwined fish-tail legs. It also dates from the 19th century. The form of the drinking horn has also been copied in other materials such as glass and pottery. 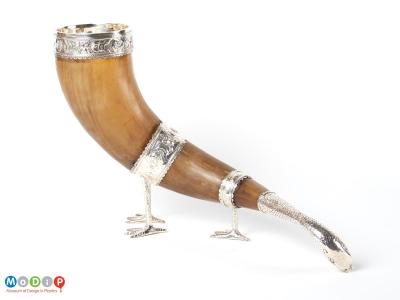 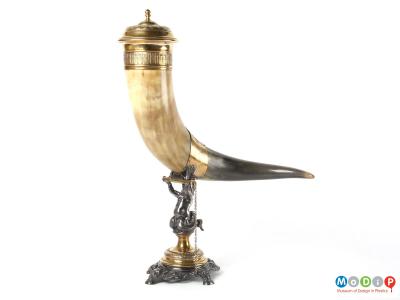