Translucent and transparent horn was cheap compared with glass and relatively durable. It was used for lanterns (1) as early as the Roman period. It has also been used in windows. Horn is non-flammable and therefore an ideal material for use with light from a naked flame. It is thought that the word 'lantern' is derived from the earlier word 'lanthorn' expressive of this use of horn panes. From 1404 until the advent of gas and then electric street lights, it was illegal to walk the streets of London at night without carrying a light and citizens were charged to hang lanterns with lit candles out of windows during hours of darkness. Lanterns with horn leaves continued to be used by shepherds until the 1930s. The horn panes were made from the central portion of ox horn. It was first heated, then split and then scraped with a knife to make it fine and transparent. Finally the resulting leaves were flattened under pressure. 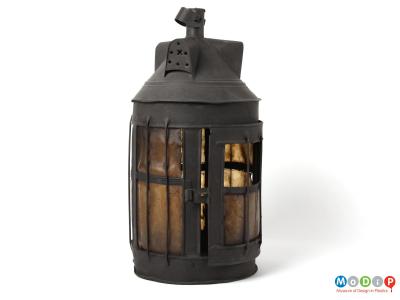