A desert is commonly defined as an area of land that has less than 25cm of precipitation in a year; a climate that is too dry to support extensive vegetation. Survival in these regions may rely on transferring water in, for example through modifying river systems, or abstracting it from groundwater supplies, but these methods are expensive and can be unsustainable.

The Waterboxx plant cocoon (1) from Groasis, was designed by company founder Pieter Hoff based on an idea conceived in 2003 to plant trees in degraded land without using costly drip irrigation. Injection moulded in polypropylene (PP), the green coloured water reservoir is placed over trees, shrubs, flowers or vegetables, which grow though the opening in the middle of the container. The beige-coloured lid is grooved to collect and funnel water from rain and dew into the storage cistern, with two blue coloured siphons guiding the water in and a cap sealing the unit, both designed to prevent evaporation. A black coloured centre plate sits beneath the lid to promote condensation water production on the underside, and a polyamide (PA) wick drips a continuous supply of water through to the plant; enough to ensure survival whilst encouraging the development of the taproot. 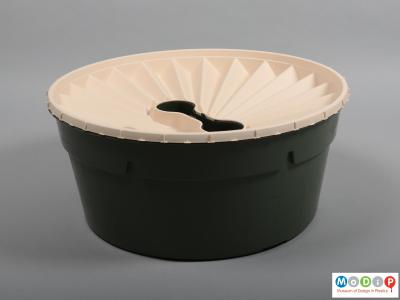 Designed to support growth throughout the first year, at which point the plant(s) will have become established, the Waterboxx can then be removed and re-used, up to ten times. This example includes an optional Growsafe Telescoprotexx plant protector, a sheet of PP which when folded into a tube to wrap around the plant, prevents damage from grazing animals and offers additional frost, storm and wind protection.

The Waterboxx has won numerous awards for innovation and environmental excellence, including being appointed a ‘National Icon’ by the Dutch Ministry of Economic Affairs in 2016. Since then, Groasis has contributed to reforestation, food production and ecosystem restoration projects in over forty different countries, testing their product in the extreme conditions of the Sahara, the deserts of Kuwait and the Galapagos Islands, all areas with limited water supplies.