To celebrate the bicentenary of Shelley’s 1818 masterpiece ‘Frankenstein, or the Modern Prometheus’ with Level 4 and 5 Creative Writing students, objects from the collection were brought together to create the body of Frankenstein’s monster. The aim of the session was to encourage the students to engage with the objects through observation and writing.

18 objects were used were laid out as the body of the monster and covered with a white cloth before being revealed to students.

Objects included a Chili herb infuser for a heart, a Mad Planet trainer for a foot, and a mottled darning mushroom for a hip. 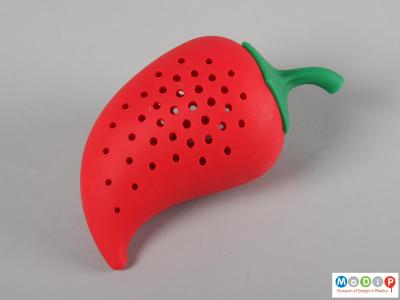 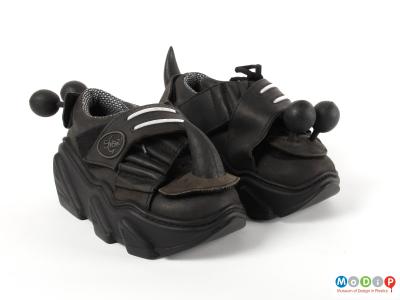 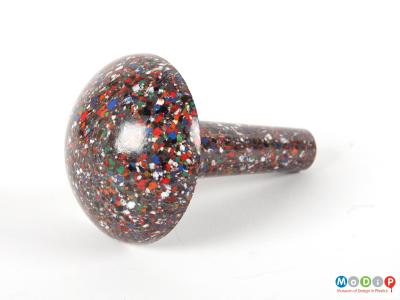 An excerpt from ‘Frankenstein, or the Modern Prometheus’ was read to the students, to give a real sense of the story.

It was on a dreary night of November that I beheld the accomplishment of my toils.  With an anxiety that almost amounted to agony, I collected the instruments of life around me, that I might infuse a spark of being into the lifeless thing that lay at my feet.  It was already one in the morning; the rain pattered dismally against the panes, and my candle was nearly burnt out, when, by the glimmer of the half-extinguished light, I saw the dull yellow eye of the creature open; it breathed hard, and a convulsive motion agitated its limbs.

How can I describe my emotions at this catastrophe, or how delineate the wretch whom with such infinite pains and care I had endeavoured to form?  His limbs were in proportion, and I had selected his features as beautiful.  Beautiful!  Great God!  His yellow skin scarcely covered the work of muscles and arteries beneath; his hair was of a lustrous black, and flowing; his teeth of a pearly whiteness; but these luxuriances only formed a more horrid contrast with his watery eyes, that seemed almost of the same colour as the dun-white sockets in which they were set, his shrivelled complexion and straight black lips.

The different accidents of life are not so changeable as the feelings of human nature.  I had worked hard for nearly two years, for the sole purpose of infusing life into an inanimate body.  For this I had deprived myself of rest and health.  I had desired it with an ardour that far exceeded moderation; but now that I had finished, the beauty of the dream vanished, and breathless horror and disgust filled my heart.  Unable to endure the aspect of the being I had created, I rushed out of the room and continued a long time traversing my bed-chamber, unable to compose my mind to sleep.  At length lassitude succeeded to the tumult I had before endured, and I threw myself on the bed in my clothes, endeavouring to seek a few moments of forgetfulness. But it was in vain; I slept, indeed, but I was disturbed by the wildest dreams.  I thought I saw Elizabeth, in the bloom of health, walking in the streets of Ingolstadt.  Delighted and surprised, I embraced her, but as I imprinted the first kiss on her lips, they became livid with the hue of death; her features appeared to change, and I thought that I held the corpse of my dead mother in my arms; a shroud enveloped her form, and I saw the grave-worms crawling in the folds of the flannel. I started from my sleep with horror; a cold dew covered my forehead, my teeth chattered, and every limb became convulsed; when, by the dim and yellow light of the moon, as it forced its way through the window shutters, I beheld the wretch—the miserable monster whom I had created.  He held up the curtain of the bed; and his eyes, if eyes they may be called, were fixed on me.  His jaws opened, and he muttered some inarticulate sounds, while a grin wrinkled his cheeks.  He might have spoken, but I did not hear; one hand was stretched out, seemingly to detain me, but I escaped and rushed downstairs.  I took refuge in the courtyard belonging to the house which I inhabited, where I remained during the rest of the night, walking up and down in the greatest agitation, listening attentively, catching and fearing each sound as if it were to announce the approach of the demoniacal corpse to which I had so miserably given life.

And then the ‘big reveal’ took place and the body was exposed for both literal and metaphorical dissection:

The students used observation skills at first before moving on to a more physical examination by handling the objects, engaging with the texture and form of each piece. They were asked to consider their responses to what they saw - whatever thoughts or ideas occurred to them initially - and then in light of the Frankenstein story, they were asked to ‘push the boundaries of observation’.

This involved asking such questions of the objects as:

Using objects from MoDiP as stimuli for students, continues to be an inspirational way for both learning more about the collection as well as sparking original ideas for creative work – as these three pieces of creative writing demonstrate:

There are no lightning bolts

Breaking at the stitching

There is no maniacal laughter

Itching at my senses –

While you leave me for dead.

No sirens cry out –

Though I try myself –

Among the inky veins and

Tendrils of the night.

And no help comes

As the day draws first breath

And sets the horizon on fire:

The battle did not happen

The way they always say –

Those prophets of old.

There was no good versus evil,

No right or wrong.

Your aid and your friendship,

That would help me stand,

Is all that I would ask.

But instead you turn your back

And pull off your mask.

They put something inside me

They put something inside me. I can feel it every time I move, every time I take a breath. I trace the lines of my ribcage with my fingertips and I swear I can feel it. There. It’s there. Something foreign in the fifth intercostal space. I’d miss it if I wasn’t looking. A small piece of resistance where there shouldn’t be. I lift up my shirt and glance quickly at the mirror. Maybe if I’m fast I’ll see it this time. But this time, just like every other time, there’s nothing there. Just the same unmarked olive skin.

The weird and wonderful from past and present

The weird and wonderful from past and present can be found in MoDiP! Its display cases of plastic creations were a recent source of Inspiration for my creative writing work. Julia gave us a great insight into the variety and origin of plastics and their impact on the history of design and technology.  We examined a ‘body’ formed from different plastic items from different decades. We looked at life saving equipment, such as oxygen masks and syringes as well as everyday inanimate objects like an old go-kart seat. The Museum and the workshop inspired my work about the future of plastics.  It was surprising to realise just how reliant we had become on non-recyclable plastics and how many everyday things, big and small had been designed this way.  As plastic pollution in the ocean has become a prominent and mindful issue, I set out writing a short piece of fiction about how plastic pollution could potentially have disastrous consequences in the future if humanity failed to design with new forms of ecological plastics.  It was an afternoon of great inspiration!