Rebecca Smith was one of three Student Creatives in the academic year 2016 / 2017. The aim of the initiative was to offer all students at the AUB an opportunity to create work inspired by the MoDiP collection. This could be in any discipline with any creative outcome from physical art work to film or acting production. The MoDiP collection and / or the museum's practices had to be at the heart of the project and the work needed to be displayed either physically or digitally after a period of 20 weeks. A small bursary was provided to assist with material costs during the project and the remainder was paid on completion.

I am currently in my second year studying Architecture at the Arts University Bournemouth and think this opportunity with MoDiP to be a student creative is a fantastic way to understand plastics further and to explore how they can be integrated into my work using the MoDiP collection as a resource.

Materials are a very influential and important part of my work, in particular their form and shape and how they dictate the evolution of a design. Using the MoDiP collection for inspiration, and in particular, some of the lighting items, I will be recreating pieces in more architectural materials, experimenting with detail and size.

The chosen pieces are: 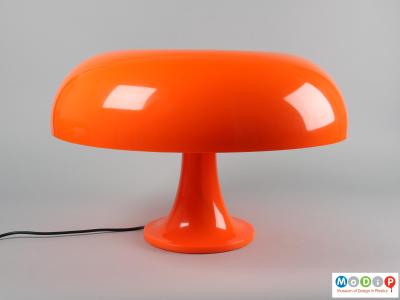 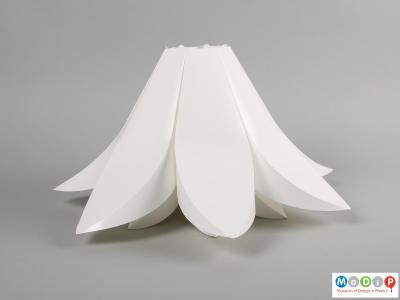 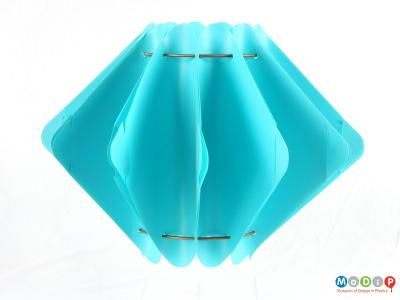 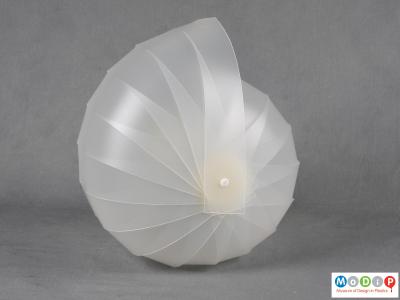 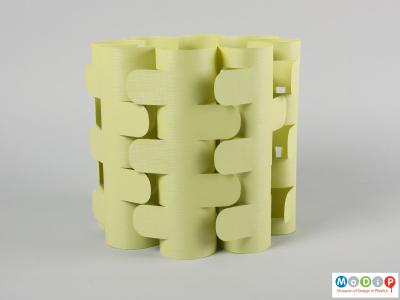 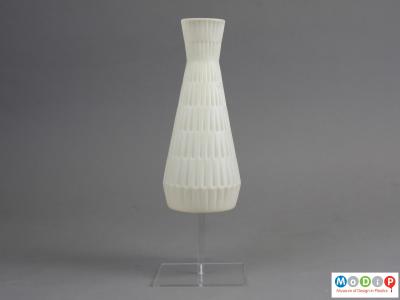 The next stage of this project will be to visit the collection to look at the pieces in more detail and try to determine how they were constructed and what methods were used to create the textures within the plastics.

Using this research, I will develop a series of lampshades taking the textures further, by integrating them with architectural and construction materials such as concrete, wood and copper.

I feel this exploratory and hands on approach to recreating some of the pieces will not only test my current skills within making, but push my learning. I wish to gain a deeper understanding and appreciation of what MoDiP do, and to look into how plastics are used in design. By engaging with the collection from an architectural approach, I hope my work will help students to think more creatively about form, texture and shape, using design in plastics as a starting point, and allowing them to see how this can be taken into a myriad of other disciplines, including architecture and larger scale design projects.

The project has gone into full making mode and a lot of research and testing has happened over the last few weeks. The first lampshade that I wanted to do was the large mushroom, as it would need the most time to cure as it will be made from concrete. The decision to use concrete for this particular shade is because of its curved and fluid look. Concrete is sometimes associated with harsh angles, and large bulky mass. This item will celebrate its diversity and ability to create beautiful and fluid curves.

The first stage of exploration was to research how these curves could be achieved, the shade would need to be thin enough that it could be placed on top of a stand, whilst being as lightweight as possible so it did not buckle the metal that separated it from the bulb. Once this research was done and equipment was sourced, the first tests were made. These were made using a white concrete mix, with no aggregate so a smooth finish could be obtained. Plastic bowls were used as moulds and three tests were done, experimenting with perforation and pattern. The outcomes were all successful, they were structurally sound and the shape achieved was exactly as desired. The patterned one did not come out as well as the concrete did not fill into all of the gaps, but the perforated one made the interplay of light very interesting.

Now that the tests are complete, a larger and more detailed shade is in the process of being made, along with a stand so it mimics the shape of the mushroom.

The next shade to be made is the shell. This will be made out of oak veneer due to its flexibility and delicateness. This material will allow light to permeate through and create a warm light. The design for the shade takes elements from the plastic shade, but will be smaller in scale and will house the bulb differently. This is because of the nature of the material and close contact to a heat source may cause the veneer to scorch so to eliminate any problems, the shade will be used for a suspended light, allowing a constant flow of air through it.

Tests have been done looking at how to join the veneer without creating too much bulk. Using its application within architecture, a knowledge of how this material is connected to other materials has helped developed an understanding of its versatility as well as how fragile it is. These are considerations that have been thought out within the design.

The veneer came as a roll and due to its expense, the design has to ensure that there is minimum wastage. The first trial was using paper to work out dimensions and lengths needed. These were successful but there is still some work to be done to ascertain how these will be connected.

The project is constantly pushing my learning further and my knowledge of the materials and their qualities is being expanded on a weekly basis. The tests and research have been invaluable, especially with concrete, as each test can produce a different result, and so using these tests has enabled me to decide on a particular course of action for the final piece.

The other four shades have all been designed and the materials have been decided, they will use paper, copper, fabric and plaster. Taking time to look at the plastic shades within the MoDiP collection has helped understand their construction, and something that I did not expect was their fragility. Plastics are sometimes though to be robust and everlasting, but examining some of these shades highlights how delicate and easily broken they can become, and so using architectural materials, increasing the longevity of an item, has added another layer to the project.

To conclude what has been a fantastic project with MoDiP, this brief overview highlights what has worked well, what skills have been learnt and how the collection at MoDiP will influence future work. The opportunity to become a student creative has allowed me to express ideas in a material way that I may not have otherwise had the chance to pursue. Using the collection as a source of inspiration, a series of lampshades were produced using architectural materials The aim of this project was to test how successful architectural materials can mirror the fluidity and flexibility achieved in plastics, and whether fine detail, texture and flexibility could be achieved to a high standard.

Materials are a very influential element with architecture, in particular how their form and shape can adapt, and how they dictate the evolution of a design. Architectural materials such as concrete or steel are often associated with being strong and bulky, used on a large scale. The work carried out in this project explores the versatility of each material, testing their ability to mimic results achieved within plastics.

The lampshades chosen each had a unique geometry and curvature which allowed the project to look at materials fragility and longevity, something that would be useful when exploring materials in personal design work.

The project evolved from an initial response of six lampshades to seven, and the chosen materials changed regularly. This freedom allowed a deep analysis of what materials worked and how they could be refined. A string element within this project was research by making, without the tangible hands on approach, the final outcome could not have been achieved.

The three metal lampshades all had to be connected differently because of the nature of the metal, the copper was riveted, the steel spot welded and the brass was sewn together through holes. This added depth to the work and created some fantastic results.

The veneer lampshade was surprisingly quick to make once a couple of tests had been done with paper. The veneer suited the curvature the shade was trying to achieve and attention to detail was needed for details such as the finals on the stand which were done on a lathe.

The glass lampshade required more testing because of its fragility. With help from local Glass sculptor, Rebecca Newnham, a design was drawn and then petals cut from sheet glass. These were carefully placed in to a slumped mould and then fired in the kiln. This allowed the glass to slowly curve to the mould and fuse with the other petals.

The concrete lampshade was the most enjoyable as it was the best material to experiment with texture. A number of shades were made, some used leaves as reliefs, another had different mixes of concrete and to change its colour and another had gold leaf set within the mould. This did not come out as expected so a new approach was needed. The concrete mould was covered with Vaseline to act as a release agent, and when it had cured, had left lots of little grooves and recesses in the concrete. These were then filled with gold leaf and the entire underside of the shade was also covered in gold leaf to help the light reflect downwards.

The last shade to be made was the fabric one. This was one of the hardest ones to make as fabric does not naturally have rigidity. Using a pleating technique, folds were ironed in and then sewn. Cuts were made at regular intervals and then ironed into position. A frame was made to hold the shade in place and was attached by hand sewing.

The MoDiP collection was a fantastic source of inspiration and provided the starting point for the project's narrative. Plastics are renowned for their durability and longevity, however, the nature in which a product is designed determines how delicate it can become, and this added another layer to the project.

This residency has developed skills in making, strengthened a knowledge of materials and instilled an appreciation for design in plastics. Plastics were previously taken for granted and were seen as a cheap alternative to handcrafted materials. This opinion has now been replaced with a respect for the versatility, complexity and beauty they can achieve. The project has been thoroughly enjoyable and will be an invaluable experience when conducting research in the future.