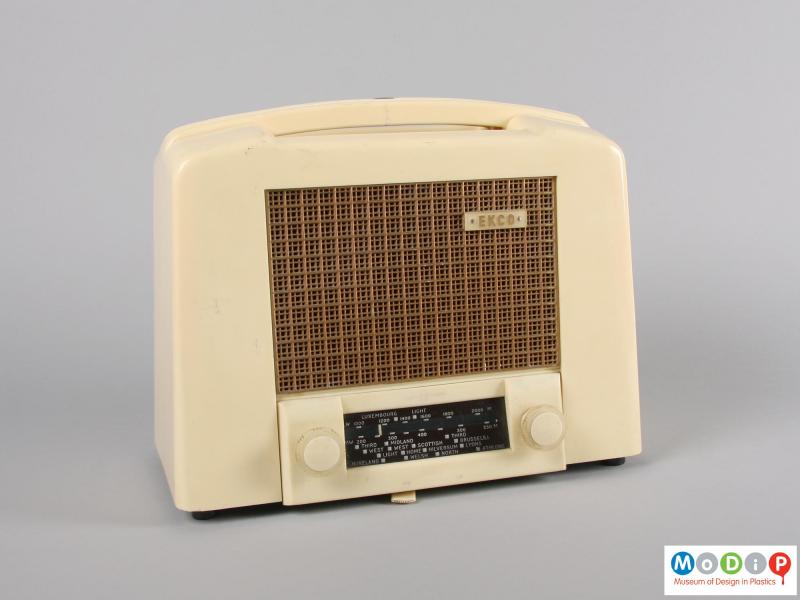 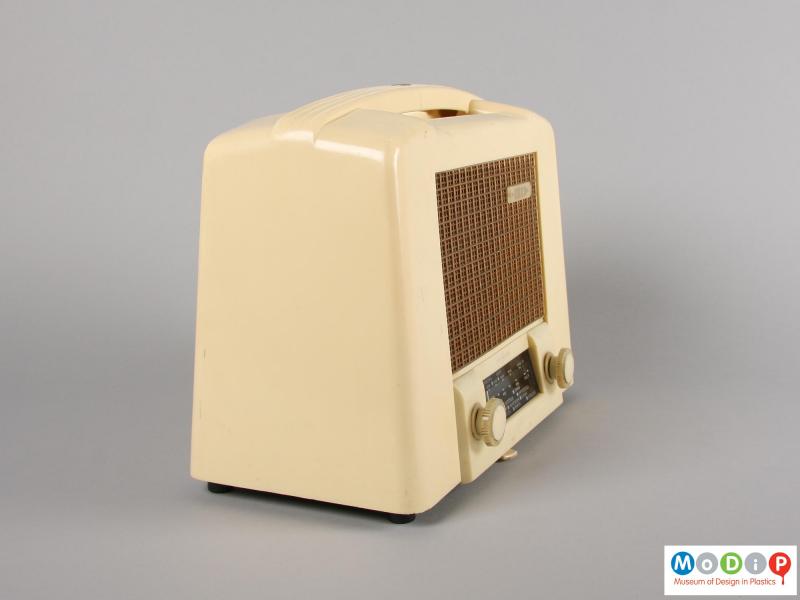 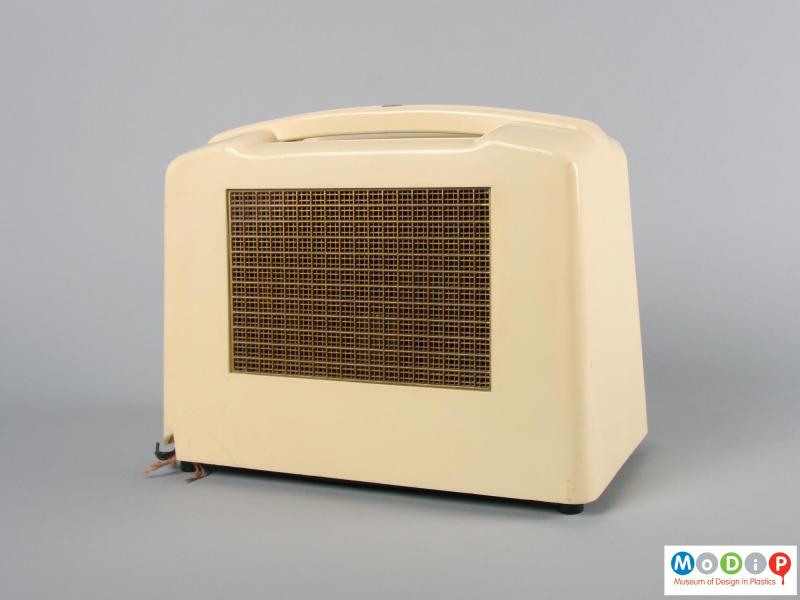 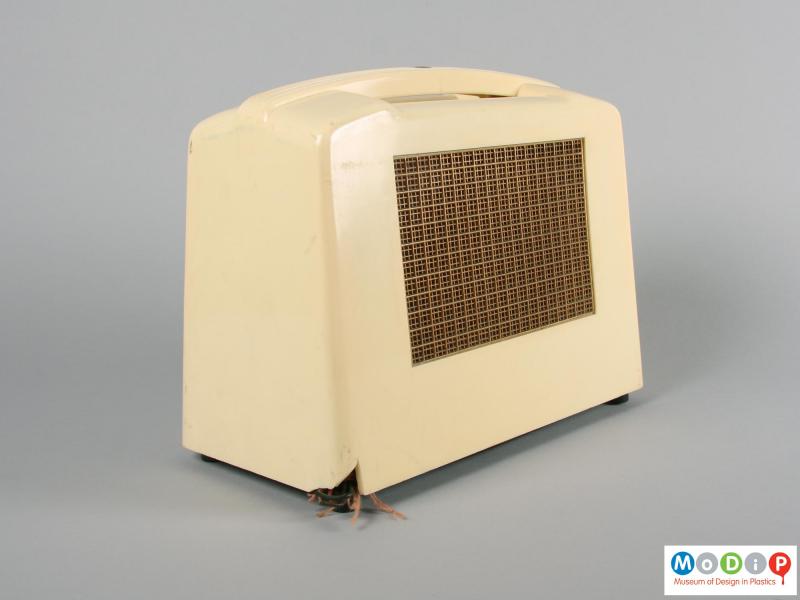 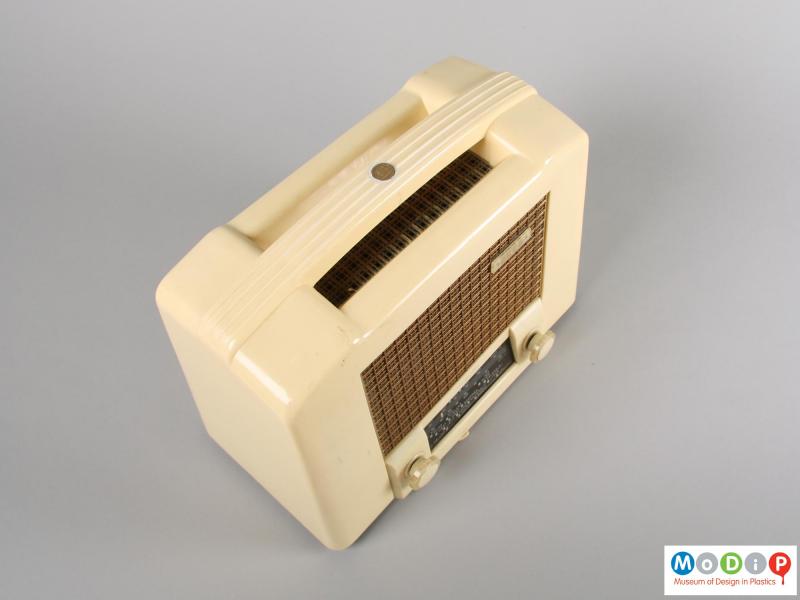 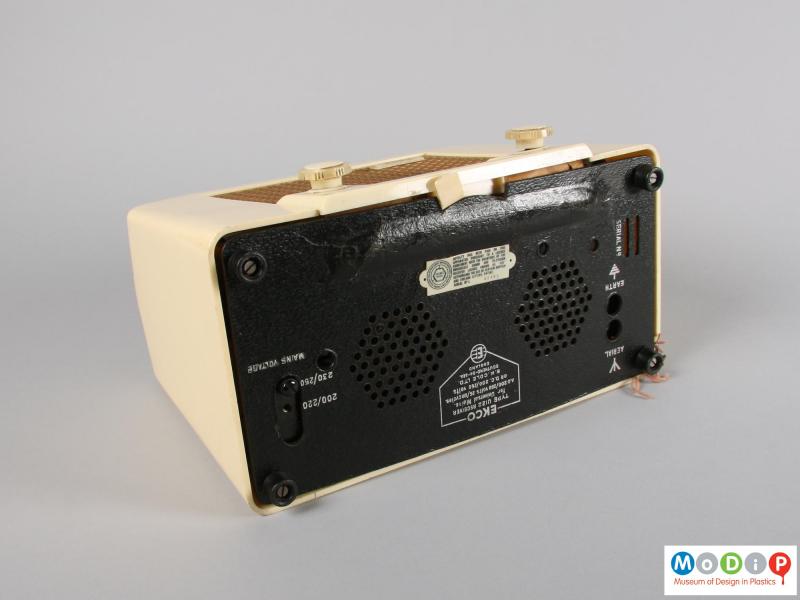 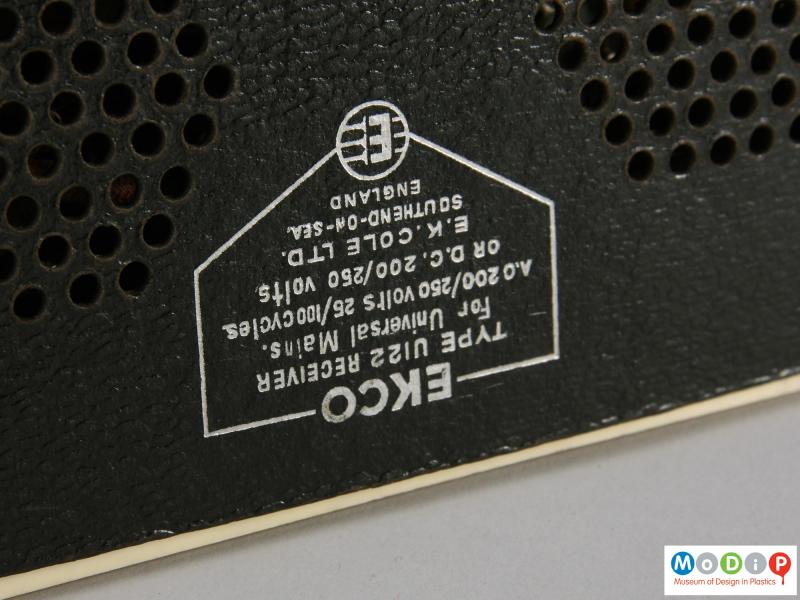 An ivory coloured Ekco U122 radio dating from about 1950. The case has a carrying handle, speaker grilles to the front, back and top, 2 tuning/volume knobs, and MW and LW switch at base. The case production used up-to-date materials and production methods. The carrying handle is an intergal part of the moulding, and in each of the four corners, conical tapered ribs not only give added strength but provided bosses holding inserts for bolting in the chassis. The injection sprue from the moulding is centred in the handle, ans when removed and subsequently drilled forms a convenient cavity for the maker's symbol which is separately moulded and gilt sprayed. In previous radios of this sort a large lattice for the grille would have been moulded to 198 sq in and then cut to the appropriate size. In this instance the grille has been moulded to the size required. The three grilles needed for this set are cemented in placeusing a quick-acting cement based on methlyene dichloride. Once the grilles are in place the chassis is simply slipped into place and bolted to the case. Bushed punched from phenolic laminate are used to provide insulation beween the chassis and the case. The illuminated tuning scale is moulded in clear Diakon acrylic, giving a lens effect in thr moulded-in wave bands. After a silvering process is applied to emphasize the characters and numerals the scale is given a sprayed background colour to match the case. The polystyrene frame or escutcheon, which holds the tuning scale in place, is botled to the set and the bolt holes conveniently concealed by polystyrene washers fitting behind the control knobs. The wtwo control knobs are produced in a double-moulding operation. The rims are injection moulded in clear polystyrene, drilled to the correct diameter and then the opaque core, colour matching the case, is moulded in. The wave band is change by a polystyrene lever fitted beneath the the tuning scale, with a ridged end projecting under the set. Finally the cabinet feet are made of black polythene covers which are non-perishing and more economic than rubber alternatives.
Designers & Manufacturers
Designer (Person)
Unknown
Manufacturer
EK Cole

Images on this site are for non-commercial, educational use only. MoDiP has done its utmost to obtain clearance from all IPR holders before adding images to this catalogue, if you believe that any image has been used without permission please contact us.

Images on this site are for non-commercial, educational use only. MoDiP has done its utmost to obtain clearance from all IPR holders before adding images to this catalogue, if you believe that any image has been used without permission please contact us.