Inflatable objects are typically flexible and lightweight with the ability to fold flat for storage when not in use. As gas, often air at either low or high pressure, provides the main supporting framework, material selection plays a key role in performance: absorbing structural loads and, where the design relies on an enclosed pocket of gas, remaining airtight.

Although people have experimented with a variety of materials, rubber, particularly as a coating on cloth, proved markedly successful as the enveloping fabric for a number of inflatable structures from the 1850s onwards. As the demand for rubber soared when it found its way into other applications, it became increasingly expensive and manufacturers sought cheaper, synthetic alternatives that could be produced in quantity. By the 1950s, polyvinyl chloride (PVC) had begun to be tested as a potential replacement and the introduction of high-frequency welding in 1965 further revolutionised what was possible.  Designers were excited to exploit this potential through radical designs in areas such as architecture, art, fashion and furniture.

Verner Panton was among the first to begin exploring the idea of creating a range of inflatable seating from 1954. He designed a footstool made from transparent PVC in 1960, but technical difficulties with the welding of the seams meant that the stool could not be mass-produced at that time. This
example (1) was re-issued for Prada in 2018. 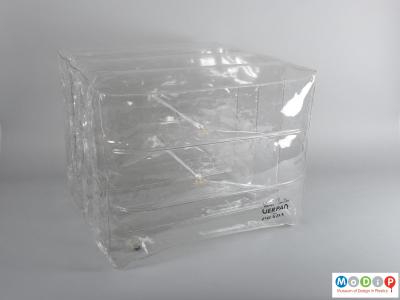 The plastics manufacturer Fatra Napajedla had been selling inflatable rubber toys from 1948, but in 1953 they developed a plasticised PVC which Libuše Niklová was able to utilise in her designs for the company. From 1961 she produced a variety of innovative inflatable toys (2), progressing to children’s furniture a decade later. This series consisted of animals that could be sat upon and bounced around the room (3), and Niklová patented a process for reducing the number of welds; simplifying and economising the design whilst strengthening it. 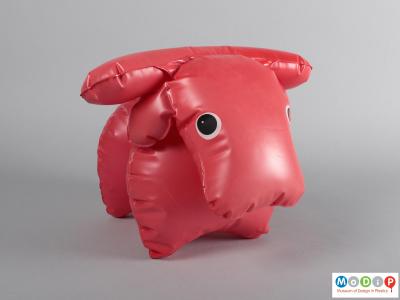 The appeal of the transient nature of inflatables was not limited
to 1960s Pop culture. In 1995, Nick Crosbie formed Inflate to launch a ‘fun, functional and affordable’ collection of products. The brand quickly achieved global success producing abstract homewares, including this feather cushion (4). 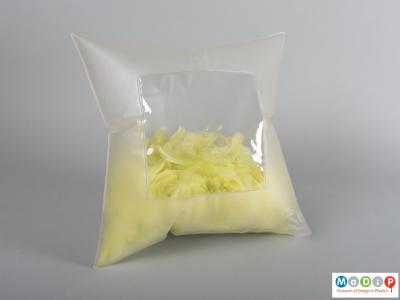