The first bicycle wheel rims were made of wood on the pattern of carriage wheels. Since then they have been made of a wide range of metals. Today they are usually made of aluminium alloy, carbon composite or a mixture of the two. This 2011 example of a Reynolds Assault wheel (1) intended for road racing has a carbon composite rim, aluminium hub and steel spokes. 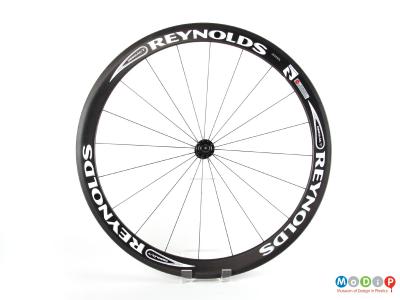 Carbon composite has a number of advantages as a material for bicycle wheel rims. It is stronger, stiffer and lighter gram-for-gram than aluminium and as a result has encouraged more aerodynamic design. The deep ‘aero’ rim of this example reduces wind drag by 10% as compared with standard rims but would be too heavy if made of aluminium. Weight as well as shape is a factor: a lighter wheel is a faster wheel because it accelerates more quickly.  To further reduce the weight of the wheel, carbon fibre spokes have been explored but until recently have proved too brittle. Reynolds Cycling has developed carbon spoke technology that withstands the rigors of professional cycling with wheels which have been raced in all major professional cycling events.

The nature of carbon composite and, as a result, how it is worked also contributes to its effectiveness. It consists of long carbon fibres of great directional strength and stiffness that are held together in resin. The alignment and weave of the fibres is chosen to optimize the strength and stiffness required. To make the rim, fibres are laid around a mould in the shape of the finished rim. The mould is then filled with resin and cured to a high temperature. The emerging form is a clean aerodynamic profile that is unattainable with metal working processes.

Under braking, heat is created by the friction between the rim and the brake blocks which causes issues related to the carbon fibre construction.  This is primarily based in the relatively low glass transition temperature (Tg) of the epoxy resin.  Epoxy resin is a thermosetting polymer, and as a result, it loses strength as the temperature of the system increases, thereby off-setting some the high-strength (primarily reducing the compression strength) of the carbon composite matrix. As a result, special composite brake blocks made of polybutadiene rubber (2) need to be used.  These brake blocks are compatible with the carbon matrix in a manner which maintains a Tg point below a critical value. 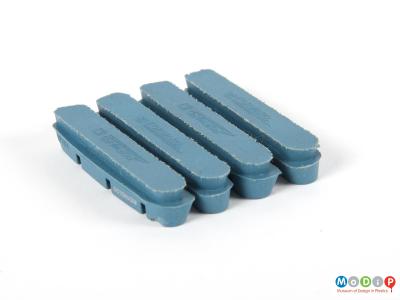 Carbon fibre wheels tend to cost twice as much as their aluminium alloy counterparts. A special feature of this example is its relative low cost. With a RRP of £1100 a pair, it costs about the same as a high quality aluminium alloy wheel and thus has made it possible for more people to enjoy such a cycling experience. Reynolds has achieved this by re-using the rim mould of one of their existing long-serving wheels and laying it up with a cheaper weave of carbon fibre.