Beaches and cliffs are constantly under threat of erosion. Coastal erosion can be caused by the ebb and flow of the waves or other natural elements. Waves pick up beach material, such as pebbles and sand, and displace it reducing the land mass or force it against cliff bases which can cause the cliff material to wear away.

Pristine Blue Flag awarded beaches need maintenance. Bournemouth’s coastline is currently in a 17-year plan of protection running from 2015 to 2032. Work includes the replacement of 53 groynes, and the construction of three new groynes. Also included is the replenishment of the beach every five years, which involves importing sand from licensed areas of seabed, such as the South East of the Isle of Wight. The total cost of this 17-year project is estimated at £50m.

The Naue’s Soft Rock (1) container is a geotextile bag made of Secutex®, a non-woven, needle-punched polypropylene material, and is designed to be filled with 2 tonnes of locally available sand providing dune security and scour protection. This soft, flexible, bag is an alternative to conventional rock and can be installed with lighter equipment than that used for stone alternatives. The flexible material fits better into the natural coastal and marine environment offering greater erosion control. The construction of the material offers better frictional behaviour than woven alternatives, meaning there is less sliding between stacked containers when subjected to waves and currents. The natural-like structure provides a habitat for plants and wildlife. 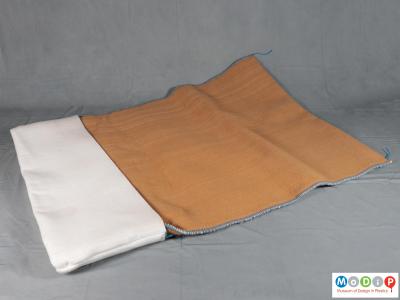