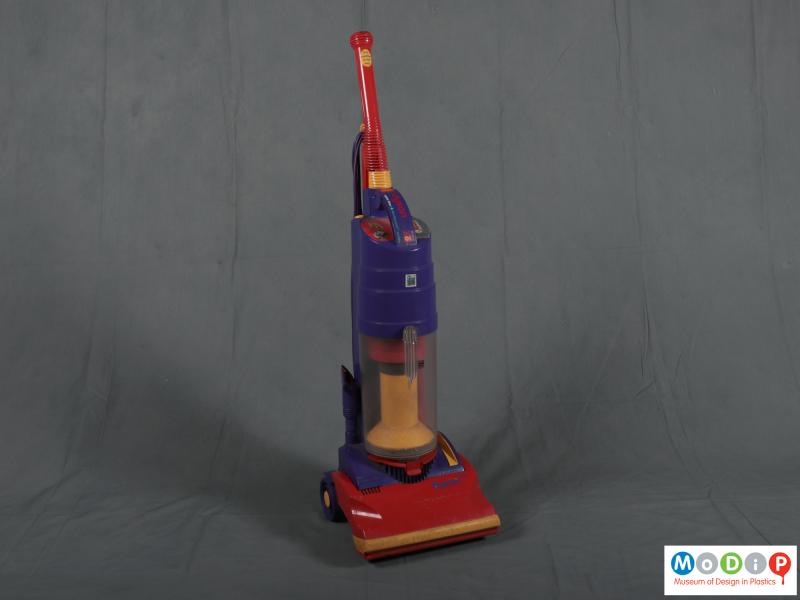 A Dyson DC01 de stijl upright vacuum cleaner, dated circa 1998, complete with three attachments. The Dual Cyclone was designed by James Dyson who realised that the bag in traditional vacuum cleaners became clogged very quickly. He set about inventing the revolutionary cyclone bagless cleaner which uses centrifugal force to lift dust and is far more efficient. Emphasis on design includes aesthetics as well as performance and colourful plastics in red, yellow and purple are used for the casing, which adds to the cleaners distinctive appearance. The DC01 De Stijl was produced as a limited edition, named after the Dutch modernist design movement founded in 1917, paying homage to the group's use of colour to highlight the structural and geometric forms. This example was made up by the donor who worked for Dyson; employees were asked to build a vacuum cleaner from scratch in order to learn assembly. He chose this model because it was more expensive than other models then available and, once complete, was able to purchase it at a discounted price. Refer AIBDC : 003023 for the original DC01.
Designers & Manufacturers
Designer (Organisation)
Dyson
Manufacturer
Dyson